America as the Hope of the World

If a Democrat does manage to get elected in 2020, he or she will not be another neoliberal centrist, but a progressive in the spirit of FDR, updated for this century.
Share
AuthorRobert Kuttner
CategoryBlog
TagsPledge, Justice, Trump 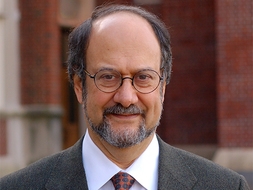 This blogpost originally appeared as an article in Common Dreams.

Where is the Democratic Party? The Party of the People is stuck in the status quo—- the still reigning, old-line hierarchy of the Democratic party is unwilling to just be dedicated to well, to the democratic interests of its own political base. People know from real-life experience that the economy has been rigged against them for the benefit of the uber-rich and the political system has been totally corrupted by the bipartisan pay-to-play ethic that protects the status quo from interference by us commoners. While Republicans are a wholly-owned corporate subsidiary, unabashedly dedicated the narrow interests of the moneyed elites, the Dems’ congressional elders, key party officials, entrenched consultants and corporate funders continue to push bland, business-as-usual candidates running on a pusillanimous policy agenda of vague “reforms” that don’t actually change anything. Then the party establishment wonders why such people stray or stay home in November!

What do those people want?

Progress! Meaning a national commitment to advance the economic, political and social circumstances of the American majority of workday families and poor people. Yes, that requires major change, and that will definitely make powerful enemies among wealthy elites plotting to impose Koch-style plutocratic rule over our society. Nonetheless, most voters want BIG populist changes in government policy that will lift up average Americans and hold down corporate greed and abuse.

One major proposal to do just that is an 11-point Economic Agenda for America’s Future, initiated by a broad coalition of some 80 progressive thinkers and doers. Coordinated by Roger Hickey of the Campaign for America’s Future and Larry Cohen, a renowned labor agitator who chairs the board of Our Revolution, this document is both a to-do list for restoring economic democracy and a rallying cry to move today’s burgeoning democratic movement from mere resistance to insistence on a new percolate-up alternative to Republican/Democratic trickle-down economics.

As Hickey notes, “If Trump and the GOP majority in Congress were to disappear tomorrow, our society would still face the challenge of restructuring our economy — after many decades of leaders allowing inequality to spread and letting our public infrastructure fall apart.” The agenda draws from the solid analyses of America’s widening inequality by such esteemed economists as Joseph Stiglitz, Thea Lee, James Galbraith, Robert Pollin and Dedrick Asante-Muhammed.

The document builds on the remarkably progressive 2016 Democratic Party Platform, which was largely hammered out between Bernie Sanders delegates and progressives in Hillary Clinton’s camp. Their good work quickly got lost in the general election debate, because the Democratic establishment’s campaign strategists didn’t like the platform’s powerful message of populist change. So, they ignored it, choosing instead the negative message that Clinton was “Not Trump.”

The drafters of the economic agenda, however, saw the enormous political value of much of that discarded platform, both in its populist appeal and in the fact that it had been produced as a progressive unity document. (“We are not interested in re-fighting the 2016 election,” says Hickey). So, they used it to enlist former backers of Sanders and Clinton to help resurrect, refine and expand it into a manifesto we can carry anywhere as a clean summary of our goals.

Process aside, what we have here is a worthy and timely program of economic renewal for our democratic movement. Rather than a flashy wish list of grand schemes, the agenda is a concise presentation of bread-and-butter ideas and basic rights that various progressive activists have long supported, and several of the items have even been implemented by some cities and a few states. Also, its drafters and initial co-signers do not pretend that this is the ultimate populist program, but a starting point for others to consider and improve, creating a well-marked political map that will show the larger public a way to put our nation back on the path to good middle-class jobs, economic justice and sustainable prosperity for all. You can read and sign on to this progressive “people’s” agenda at CampaignForAmericasFuture.org.